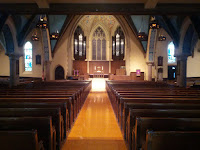 On March 22, 2016, our sanctuary was destroyed in a three-alarm fire.  The rest of the building was infiltrated by smoke or flooded by the tons of water poured in by firefighters to keep the fire from spreading. Over 35,000 s.f of space needed new carpets, ceiling tiles, sheet rock, paint, drapes, blinds, etc.  Our previous sanctuary was thought by many to be beautiful and historic, and housed the largest pipe organ in the county.

The fire happened on the Tuesday of Holy Week.  Our Easter services were moved to the Bergen Performing Arts Center, the only available facility that could hold the 500+ we expected for Easter worship.  For the next 18 weeks we were hosted primarily by the Dwight-Englewood School, a private school with which we have historic ties, and Temple Sinai, a Reform synagogue.  (A little piece of history, when Temple Sinai was founded , their first High Holy Days services were held in our building.)

Now we've moved back "home" - to Elmore Hall (named after a former pastor).  It used to be our gymnasium, but we completely renovated it into a worship space for 200.  I love it.  A new sound system, A/V capability, even an electronic organ.

1.  The depth of a person's connection to the people and the Christ-centered mission of the church was largely negatively correlated with the emotional devastation they expressed about the loss of the building.

Our leaders, our long-time members, our most dedicated volunteers - they just kept plugging away at being the church.  That doesn't mean they weren't sad about the building, but they understood that the church is people serving Christ together.  I was recently invited to speak at Temple Sinai at their Tisha B'av service (a memorial day on the Jewish calendar that marks the destruction of the Temple).  When I made the point about this negative correlation of involvement to sadness, the rabbi asked if any of my members who were present agreed.  One woman - a senior citizen who has been a member since the 1950s - said, "You know, after the fire, I had wondered if I should have been sadder, because I was disappointed, but I wasn't that sad."  For her and for others like her, the church owned a building, but it wasn't the building.

2.  This doesn't mean that a building isn't important to ministry

There is a significance, however, to having a permanent place.  On our second Sunday back, we had an adult baptism of a person who had worshiped with us for some time, but decided after the fire that it was time to make a public profession of faith and be baptized.  Our third Sunday back we had an infant baptism.  In these past two weeks, two more families decided it was time to have their babies baptized and asked to schedule them.  It doesn't matter to them whether we are in a Gothic sanctuary or a cinderblock gymnasium.  What matters is that we are home.  And home is where the people are, where Christ is worshiped and glorified, but it's also a place.

So it seems that the clear lesson is simple: a church is people united in Christ, and the work of the church is facilitated by a church building - as long as we remember that it is a building, and not the building.
Posted by Richard Hong at 11:43 AM